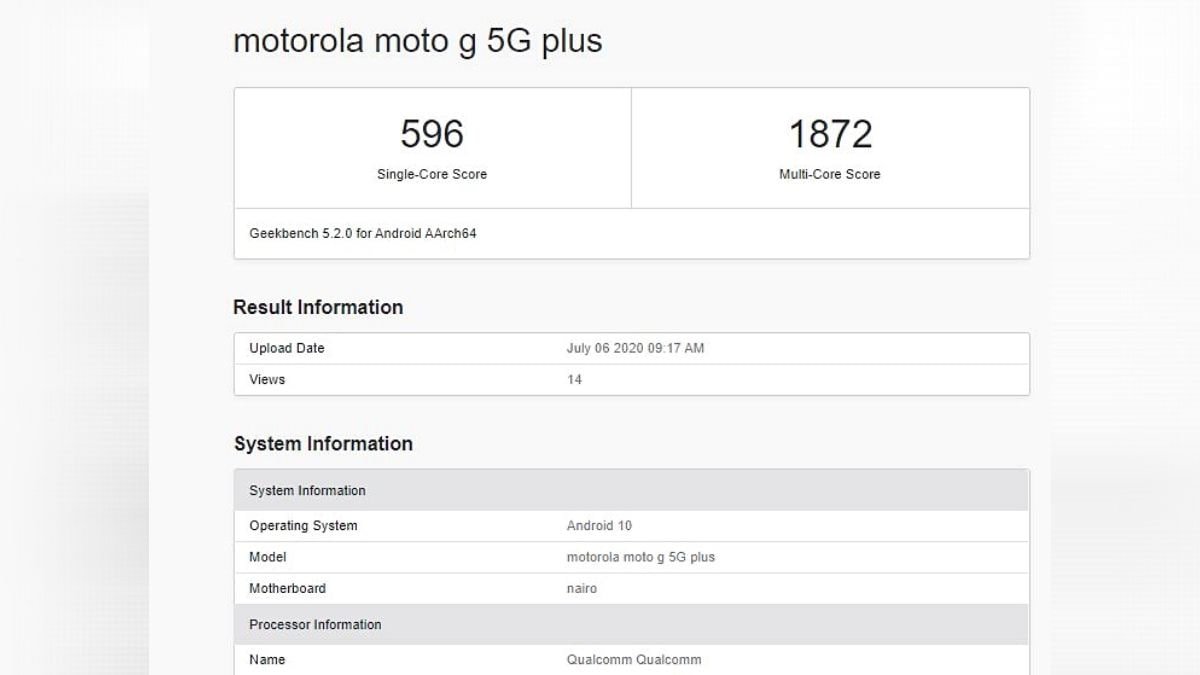 Moto G 5G Plus has reportedly surfaced on the US Federal Communications Commission (FCC) and TUV Rheinland certification sites, therefore hinting at some of the phone’s limited specifications. The rumoured Motorola phone is tipped to pack an unnamed octa-core Snapdragon SoC, 4GB RAM and a 5,000mAh battery with support for 20W fast charging. The Lenovo-owned Motorola phone reportedly carries the model number XT2075-3, that a report recently claimed belongs to Moto G 5G Plus. Rumours suggest that the Moto G 5G Plus has a vanilla Moto G 5G sibling, that was earlier speculated to be called Motorola Edge Lite. In the meanwhile, it has been spotted on benchmark site Geekbench.

The development was shared by the online news portal Dealntech. According to the report citing a US FCC listing, the Moto G 5G Plus will come with dual-band Wi-Fi, NFC support and 5G connectivity. The smartphone is also said to include Galileo, GLONASS, and GPS. Its battery reportedly carries the model number LZ50, which is purportedly listed in the TUV Rheinland certification database as a 5,000mAh battery with support for 20W fast charging.

Meanwhile, the phone has also surfaced on benchmark site Geekbench. According to the listing, which was first spotted by the site Nashville Chatter Class, the Moto G 5G Plus runs Android 10, and is powered by an octa-core Qualcomm SoC that has a base frequency of 1.8GHz. It is also listed with 4GB of RAM.

Another notable tipster Evan Blass has indicated that the Lenovo-owned Motorola may launch the Motorola Edge Lite as Moto G 5G. He had also suggested the development of Moto G 5G Plus. It was added that that Motorola could still launch Motorola Edge Lite for Verizon in the US with model number XT2075-1.

Motorola is yet to confirm the development of the Moto G 5G and Moto G 5G Plus phones, therefore, it is advised taking the information with a pinch of salt. Motorola is likely hosting an event on July 7 where the launch of Motorola One Fusion is expected.

According to Blass, the dual-SIM (Nano) vanilla Moto G 5G will carry Qualcomm Snapdragon 765 SoC, coupled with 4GB RAM and 64GB internal storage. It will reportedly run on Android 10 out-of-the-box and feature Full HD+ resolution display with 90Hz refresh rate. The phone’s quad rear camera is rumoured to include a 48-megapixel main camera, an 8-megapixel ultra-wide camera, a 5-megapixel macro sensor, and a 2-megapixel depth sensor.