Trying to find the true meaning of the phrase smart casual can quickly turn into a nightmare. The Oxford Dictionary defines it as “neat, conventional, yet relatively informal in style, especially as worn to conform to a particular dress code”. But these days it’s quite common for smart casual to be the dress code.

So you go online to search for smart casual style guides that variously counsel everything from shorts, which don’t strike us as especially smart, to Ascot ties, which don’t come over as particularly casual. And as the latter indicates, many of these guides feel like they were set in stone shortly after the ten commandments. Whatever smart casual means, it’s likely to be something different today than it was in the starch-collared 19th century.

“Smart casual is destined to be one of those terms that history will not be kind to,” says Josh Sims, author of Men of Style. “Thankfully, the recent explosion in non-designer-y brands offering considered, very wearable clothing is making moot the second guessing of whatever the term means. Because actually, it’s all quite smart now – but in a comfy way.”

The History Of Smart Casual

The precise origin of smart casual is as hard to track down as its meaning. Website The Phrase Finder – as definitive as that is – claims that the term is “thought to have originated around the 1980s” but was in “common use throughout the last century”. In fact, the first recorded usage of the terms dates back to a 1924 edition of Iowa newspaper The Davenport Democrat And Leader (although that was in relation to sleeveless dresses, which we certainly can’t advocate wearing).

Whatever the truth, it’s a fair assumption that smart casual is related in some respect to business casual, and the two are often used interchangeably, even though they’re different: one is for at work, and one isn’t. But back in the day, you didn’t just dress smartly to go to the office, but everywhere else too. As the traditional standards of dress eroded, smart casual was the hastily erected bulwark against total sartorial chaos.

“Smart casual suggests a transitional period between dressing up – that’s to say, more formally – and dressing down with the comfort and self-expression that more and more men are looking for,” says Sims. “The term also suggests a kind of panic among ‘authorities’ – restaurant managers, event organisers – as to how to handle the shift, so they’ve gone for some halfway house: dress casually but, you know, not too casually, please. The result? Endless confusion. Or men in blazers and open-neck business shirts.”

Don’t be those guys.

Smart casual means nothing, so it can mean anything. According to Mr Porter’s Style Advice page, the smart casual gamut comprises “pretty much anything smarter than a tracksuit, but less formal than a suit”. Thankfully, and rather more informatively, Mr P adds, “An ideal answer is a blazer, white shirt, neat jeans, and brown loafers.”

There is no one answer, though. In a well-meaning attempt to clarify that ironically complicates matters further, Debrett’s Guide for the Modern Gentleman draws a distinction between “formal smart casual” and “informal smart casual”. Formal smart casual is “a jacket or blazer, flannels, needlecord trousers, or chinos (not jeans), a shirt with a collar (not a T-shirt) and smart shoes (not necessarily lace-ups, but not trainers or sandals)”.

Informal smart casual remains vague, however, beyond consent for “smart, clean, dark-coloured jeans”, a pronouncement that “polo shirts are better than collarless T-shirts” and an instruction to “change from what you have been wearing at home”.

But while it might sound obscure, this last point is perhaps as good as any to start from. Part of the reason that smart casual is so hard to define is that it can mean radically different things in different contexts. It’s a state of mind as much as dress.

“Smartness is more a matter of the appearance of your clothes rather than their style,” writes Sir Hardy Amies in A-Z of Style. “Shoes polished, trousers pressed, and tie properly tied are necessary factors in a smart appearance.”

The operative words here aren’t ‘shoes’, ‘trousers’ or ‘tie’ (we’re talking about smart casual, after all), but ‘polished’, ‘pressed’ and ‘properly’. A pristine T-shirt, indigo jeans and box-fresh trainers can look dressier than a wrinkled shirt, stained trousers and scuffed shoes.

A T-shirt, jeans and trainers won’t always be appropriate, mind. But smart casual is arguably more a mood or attitude than it is a set formula or combination of pieces. As Debrett’s says, “Just because an event is informal, it is not synonymous with making no effort.” 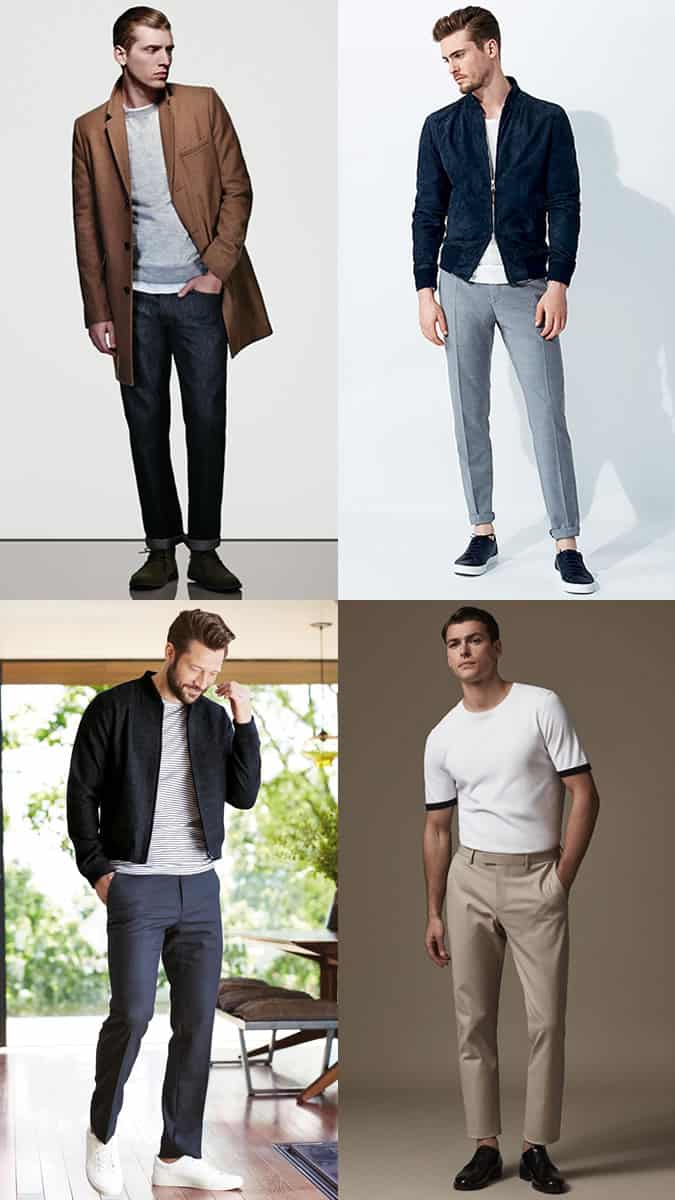 As we’ve established, smart casual is nigh-on impossible to define. So a more helpful and practical approach is to start with a casual outfit and then change one – or better, two – pieces for smarter alternatives.

Now swap in any one of blazer, shirt, trousers or chinos and shoes. You should be verging on smart casual territory. Swap in two and you should be bang on target. Swap in three and, depending on the circumstances, you might even be too smart. It’s a fine line. 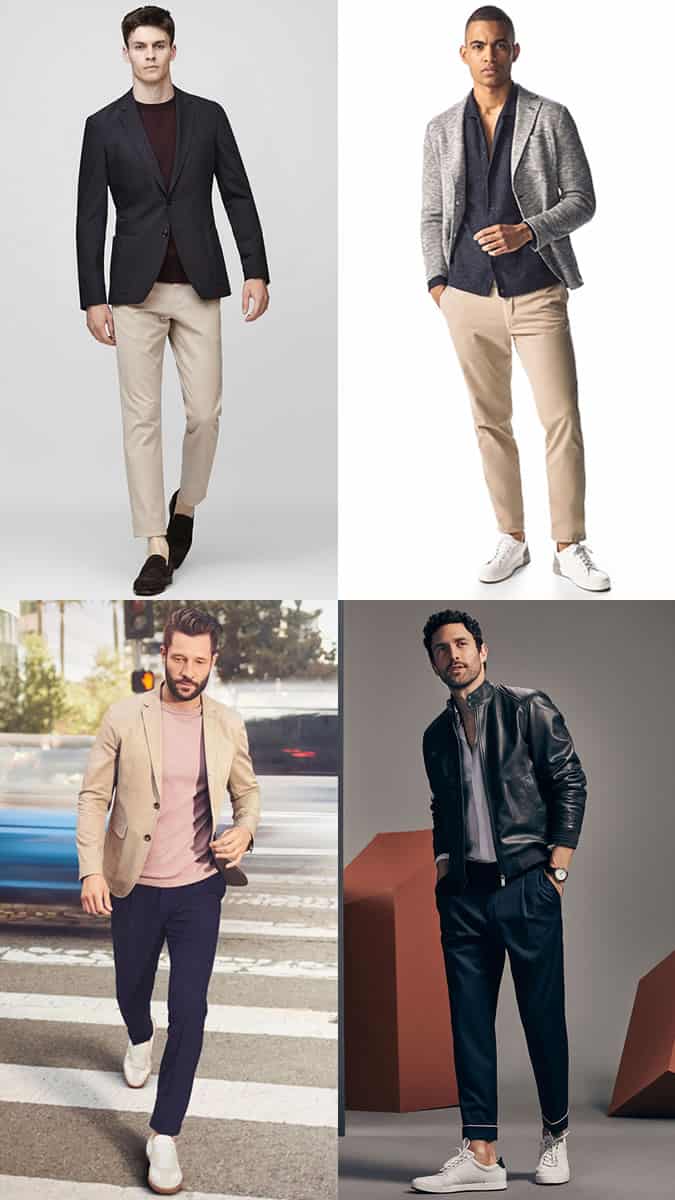 You don’t even have to change pieces to adjust the casualness of an outfit. Darker colours skew more formal, so smartening up can be as simple as turning down the lights.

Now swap the olive bomber for a navy one, and the stonewashed jeans for indigo. Suddenly it feels dressier. Even more so if you swap the white T-shirt for, say, mid-grey or charcoal, and the trainers for navy or black.

The constituent styles are exactly the same, but the overall effect is very different. And the reverse is true: lightening up is a dimmer switch for smartness. Take The Rough With The Smooth

Another (major) factor that affects the relative smartness or casualness of a piece is texture. If you think about the most formal items in menswear – worsted wool business suits, say, or barathea dinner jackets – they’re almost invariably smooth and shiny.

Swap the worsted wool for a matte flannel or tweed, however, and you both literally and metaphorically change the feel of the piece. This will also often make the garment seem larger in size, which only adds to the more casual vibe, given that smarter looks are usually sleek and streamlined.

This is a handy rule of thumb and forefinger that you can apply to casualise much any piece: shirts, knits, trousers, even shoes. As previously mentioned, throwing a blazer over T-shirt, jeans and trainers is as easy a move as any to nail smart casual. But not all blazers are created equal: gold buttons are, to borrow a delightful phrase from Debrett’s, a bit “gin and Jag” (AKA the sort of middle-class people who drive Jaguar cars and drink gin and tonics).

As also previously mentioned, a blazer with some texture will rub up the right way with jeans. As will one cut a little shorter, perhaps also with slightly slimmer, more contemporary lapels. Patch pockets – which look like they’re stitched on – are similarly ‘cazh’.

Finally, ripping out the padded shoulders and canvassed chest found in smart blazers will also make them feel more casual, not to mention comfortable. N.B. Don’t actually rip your blazer, just look for the word ‘unstructured’. A T-shirt can qualify as smart casual, provided that it’s plain, good quality, well-fitting and not washed to death.

But upgrading to a polo shirt will instantly smarten a casual rig. The buttons and collar put it further along the spectrum towards a shirt, but it’s still sporty. Indeed, as the name suggests, it was originally worn for playing polo, as was the button-down collar so that it didn’t flap around.

Which brings us neatly to the button-down shirt, which isn’t as stiff as one with a rigid collar and cuffs. It also commonly comes in fabrics such as Oxford cloth or chambray, which are less smooth and shiny. Put On Your Finery

A jersey sweatshirt or hoodie wasn’t an element of our example outfit. But substituting a fine-gauge knit in merino, cashmere or even cotton for these thick, casual and sporty pieces can lend a soupcon of sophistication. Pull a plain jumper or cardigan over your T-shirt (and maybe swap the trainers for shoes) and you’re getting weaving.

Clearly a chunky knit isn’t going to have quite the same effect, although a shawl-collar cardigan instead of a jacket can look smart if it doesn’t have toggles or a massive moose on it. A knitted blazer is somewhere between the two.

A word or 23 on roll necks: too thick and they’re not smart, too fine and they’re about as casual as Hemingway’s drinking. Legwear is usually a smart casual sticking point. For the most part, jeans are perfectly acceptable – even in a business context – as long as they’re dark and undistressed. But there’s always a risk. Then there’s failsafe chinos – emphasis on ‘safe’.

Your pins are an oft-missed opportunity to not formalise an outfit, but also flex. Going back to the bomber jacket, T-shirt, jeans and trainers example, swapping the jeans for tailored trousers can not only look smart, but also fashionable.

A textured, not-too-shiny fabric like flannel or linen can help you pull the casual trouser off, but it’s not an entry-level swerve. Which is why most guys stick to jeans or chinos.