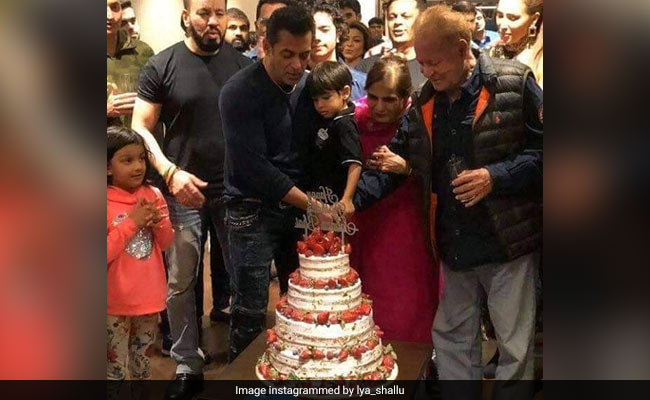 Bollywood superstar Salman Khan turns 54 today and wishes from fans and followers around the world have started to pour in for him on the internet. While this day is no less than a festival for his fans who celebrate it for him in their own unique ways, Salman hosted a party for his close family and friends last night in Mumbai. As per pictures and videos on social media, Khan started his celebratory feast early with his family, including parents Salma and Salim Khan, sister Arpita and her son Ahil in his arms.

Actor and Salman’s brother-in-law Aayush Sharma posted a video on his Instagram story in which Khan is seen cutting a decadent four-tiered cake. In another video by Bollywood reporter Manav Manglani, Salman, surrounded by the guests, cuts the delicious towering cake with his nephew Ahil in arms, holding a knife along with mother Salma and father Salim. Sisters Arpita and Alvira along with other guests can be seen singing the happy birthday song for their brother. Take a look at the video